Planting Saplings Among the Redwoods - February 21, 2019 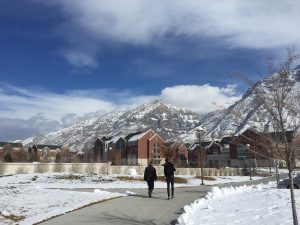 Rick and Ben on Campus at BYU

It felt like we hadn’t performed The Man Who Planted Trees for a while. Actually, it was Norwich in October, and just before that we had spent 3 fabulous weeks touring the show with Gardner and Wife Theatre Company in Malaysia.

I set out from Edinburgh alone on January 21st, bringing all our flight cases as I was meeting Rick and his son Ben (stand-in techie for Elspeth) who were flying in to Salt Lake City from Shanghai where they had been performing Rick’s adaptation of The Time Machine. 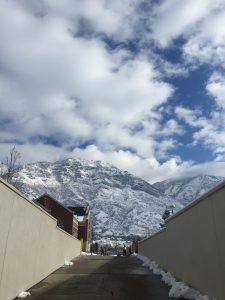 We were revisiting two of our favourite US venues, Brigham Young University in Provo, Utah and Arcata Playhouse in Northern California. Both places evoked the same (oft-repeated) joke post show:

Once again we met with great hospitality and wonderfully responsive audiences both of school children and adults. The BYU campus is lovely, the students amazing and the staff generous in the extreme. We did a number of workshops with drama students and five performances. At the end of a week we were sorry to leave but looking forward (kind of) to three days of driving the nearly 900 miles to the California coast. The weather was kind to us, even though further to the east and north the country was struggling to cope under the Polar Vortex. The scenery between Utah and California was… vast! Ranging from huge desert-like vistas, through the mountains to the densely wooded regions nearer the coast. 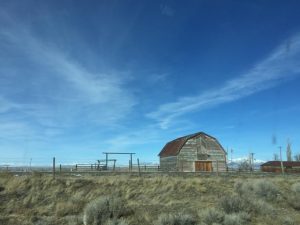 A barn in Utah

Arcata was familiar territory, and once again the people gave us a wonderful reception. This time the special bonus was that the local Jonsteen Tree Nursery had donated 650 saplings to be giving to each and every audience member for free after the shows. 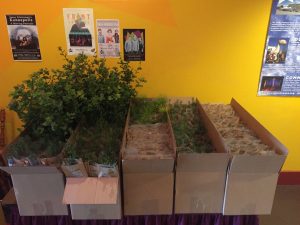 Whenever this was announced it was greeted with gasps of surprise and delight from the audiences. As the children and adults left clutching their tiny trees it struck me that in a sense this was completing a circuit: the show is very interactive, what with the lavender and forest smells we waft into the audience, then the wind, the rain, birds flying overhead etc. To then have everyone go away with a tree of their own to plant in the earth, the multi-sensory performance is complete, and we will have fulfilled in some way Jean Giono’s intention in writing the story back in 1953, “to make people love trees and to love planting trees.”

A similar thing had happened last year in Kuala Lumpur, where a local environmental organisation had set up their stall and given out saplings after the family shows.
While in Arcata we were visited by a couple who drove more than 5 hours from Oregon to see the show. This was part of Bill Ritch’s response to the show:

“My wife Janis and I greatly appreciated your show. There were many things that captivated me about your creative performance. Perhaps the biggest was your presence of being so fully in the moment. While I knew you were not improvising, your performance was so alive it seemed like you were “simply” having fun and improvising everything.
I greatly appreciated how you brought the story alive. You clearly dissolved the 4th wall by including all the elements (water, fire – “candle,” etc.) and appealing to all the senses. These steps created audience participation on many levels! I also felt your creation of the character Dog with his humour further brought the story alive. Dog not only captured my attention but deepened my experience of the feelings and emotions being experienced by Jean and the Shepherd. The gestures of all the puppets really popped out for me, reinforcing my joy for physical theatre. To me, your performance was a brilliant work of art.” 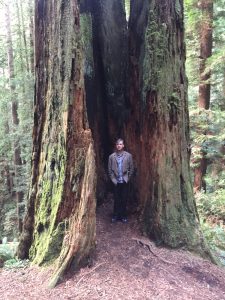 Rick in the Redwoods

So now we are all back home, just about over the jet-lag which I for one am finding it very difficult to shake off as I get older. This may also be partly due to my sense of impending doom when I wake at odd hours of the night, as the spectre of Brexit looms ever closer.

But that’s another story. On the plus side, I am feeling a renewed enthusiasm for the show and in particular for doing some rural touring nearer to home. It has been several years since we have taken the show around Scotland. We are exploring ways that we can replicate the “Arcata model” and work with local and national environmental groups to connect audience members with the physical act of planting trees. Even if it sometimes feels like we are all going to hell in a handbasket, we might as well have some earth and a few saplings there in the basket, if only as a gesture of goodwill and a parting gift for this tired planet.

We are hoping to return to the Scottish Storytelling Centre this August for another Fringe run, possibly including a few performances of Leaf by Niggle, which we have also been invited to perform at the Tolkien Society’s 50th Anniversary celebration in Birmingham this summer. 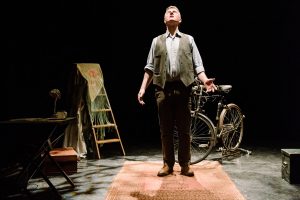