This six-week tour of North American began in Montreal and what a good start to the tour that was. Pourquoi? Well, il y’a 5 bonnes raisons (that’s 5 good reasons):

Louise is Director of Casteliers, Montreal’s puppetry-promoting arts body, and was there to meet us at the airport. We first met her in September 2011 in France at the Charleville International Puppetry Festival. We’d taken on the challenge of performing The Man Who Planted Trees in French for that festival and felt that it was a big vote of confidence when Louise asked us to do a Version Française for two of the shows we were already booked for at Theatre Outremont. That was a few months ago so we were nervous about dusting down the parlez vous but the reception from Montréal audiences was heart-warming. Louise made us feel very much at home and we enjoyed meeting her husband Daniel Butcher and can (controversially) confirm that her sister Claude’s bagels are at least a match for those we’ve devoured in New York. Not only that but she introduced Elspeth to her delightful coiffeur, Stephan W who, as a native of Charleville, not only does very chic hair styling but also gives good puppetry chat!

Renowned for his incredibly skillful and high-energy marionette performances, Ronnie Burkett is a huge name in international puppetry so we were thrilled to get to see his latest show Penny Plain at la Place des Arts. It was compelling and impressive, funny and tragic. There is a short video here and a selection of images of the beautiful puppets at Ronnie’s producer’s website here.

Agnès is the granddaughter of the French author Jean Giono whose wonderful fable The Man Who Planted Trees is the inspiration for our puppetry and storytelling adaptation. We first met her in New York’s New Victory Theatre in 2009 and it was a great pleasure to see her again – and her wonderfully sparky teenagers Pauline and Timmy. Agnès helped coordinate the screening at Theatre Outremont of the documentary about her grandfather, Le Mystere de Jean Giono – through which we learnt that while Giono spent most of his life in Provence, it was Scotland’s mountains and lochs that really captured his heart. Thank you, Agnès, for your hospitality. Who knows where in the world we might cross paths again …

Oscar-winning Canadian animator Frédéric Back came to see our second French show in Montreal – a great honour for us. We were nervous about what he would make of our adaptation. His animation of The Man Who Planted Trees is a 30-minute long gem of painstakingly animated artwork that lovingly represents the characters of Jean Giono’s original story. Our show is made of hessian and cardboard and is padded out to more than an hour with unscripted banter with an irreverent dog puppet. Fortunately, because he is an advocate for animal rights, he was actually very pleased that we let the dog’s character shine.

As well as attending the film screening one night, our show the next, Frédéric Back still had it in him to come out the next day plant a tree to mark the start of Montreal’s Earth Day. 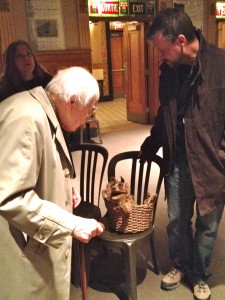 Originally we were going to be performing on 21st April, Earth Day, but the scale of the event this year meant that pretty much all of our audience would be out on the streets. There’s a greater sense of urgency than ever before about demonstrating to politicians that business as usual is not in the best interests of those of us who depend on the planet for our livelihoods – and at the end of the day, that’s all of us. Also in Montréal there’s a strong feeling that a large mining project in the North of Quebec, Le Plan Nord, has got all its priorities wrong. This Montreal Gazette piece reports that there were 250,000 of us out on the streets.

This video shows Frédéric Back planting an acorn as the bells chimed to mark the start of the march.

Even if you don’t understand the French voiceover, the sight of this generous man planting a single acorn and the hundreds of thousands of people making the shape of the tree/hand are very powerful. It was a privilege to be there.