While we have more to tell you (in a future post) about The Man Who Planted Trees, the bulk of 2016 was spent getting ready for and performing our new show (the one it took us more than 20 years to get around to) JRR Tolkien’s Leaf by Niggle.

The tour of Scotland and Northern England began in April and ended in July, and was followed by a wonderful Fringe run at our favourite venue, the Scottish Storytelling Centre.

Hard to believe now that it all actually happened, but the reviews and our guest book are testament to a very successful tour, with audiences who were moved and spoken to by this amazing story. 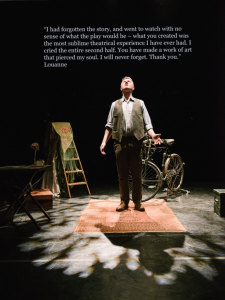 Here are some of our favourite quotes on our facebook page.

Along the way we entered into discussion with the Tolkien Trust and Harper Collins who have now published, for the first time ever, a stand-alone edition of Leaf by Niggle, specifically designed to coincide with our tour. They used our artwork for the cover (thanks to Iain Craig) and even gave us a credit on the back. It’s a beautiful little book and only costs £3.99! 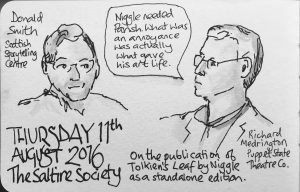 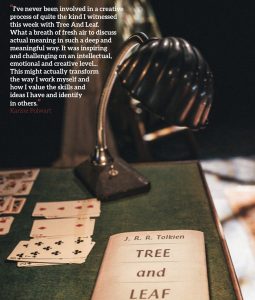 So what do Tolkien aficionados make of our adaptation?

Adapting any well-known story for the stage is always a risky venture. While Leaf by Niggle is not a well known Tolkien title, any Tolkien expert worth his or her Lembas bread is at least going to be aware of it and may well have read it several times. Our decision to stick closely to the text (omitting only half a dozen words) should have stood us on solid ground, but it was still unclear how they would react to the framing of the story, the use of props and the general delivery of the piece.

We had two crucial tests: the first at Howden Park Centre in Livingston where we’d heard 18 members of the Polish Tolkien Society were going to be in attendance while on a #TolkienJourney round the British Isles and the second was to come after the main tour and the Fringe, when we were to go down to St Antony’s College Oxford for the international gathering of the Tolkien Society for their annual Oxonmoot. This time not 18 but 270 of the most dedicated Tolkien fans from all over the world would be in attendance.

So how did they go, these tests?

“If the theatre is a form of communion of the performer and the onlooker, Leaf by Niggle is a bit more than that. It works and conveys true magic.” Magdalena Słaba

First of all, we couldn’t have done it without the phenomenal coordination of a tremendous production team headed up by the Tolkien Society’s wonderful Mike Percival. Mike met the challenge of coordinating the transformation of an Oxford college dining hall – with no blackout – into a beautifully-lit, raked theatre seating 300 in a mere matter of hours. Take a deep breath and you can see about twelve hours condensed down into 25 seconds below but please don’t blink …

The set-up always takes longer than the strike 😉

And how was it received?

They LOVED it! There was a full standing ovation and afterwards the audience queued for an hour and a half to talk to Richard and get him to sign copies of the new book. Mike Percival had this to say:

Thank you so much to Shaun Gunner, tenth and current Chairman of the Tolkien Society, who invited us and to everyone who made us very welcome.

For a fuller report – with beautiful illustrations – of the whole tour, you can have a look at this lavishly illustrated document full of quotes and facts and figures.

Leaf by Niggle is taking a rest for a few months while we are busy planting trees in Manchester for two weeks over Christmas, then we return to North America for a three month tour in the spring. Niggle will be back in Edinburgh during next year’s Fringe (at the Storytelling Centre again) and in the autumn of 2017 it will be touring the UK. If you are interested in booking a performance of Leaf by Niggle, contact Alice McGrath at Red Bridge Arts.